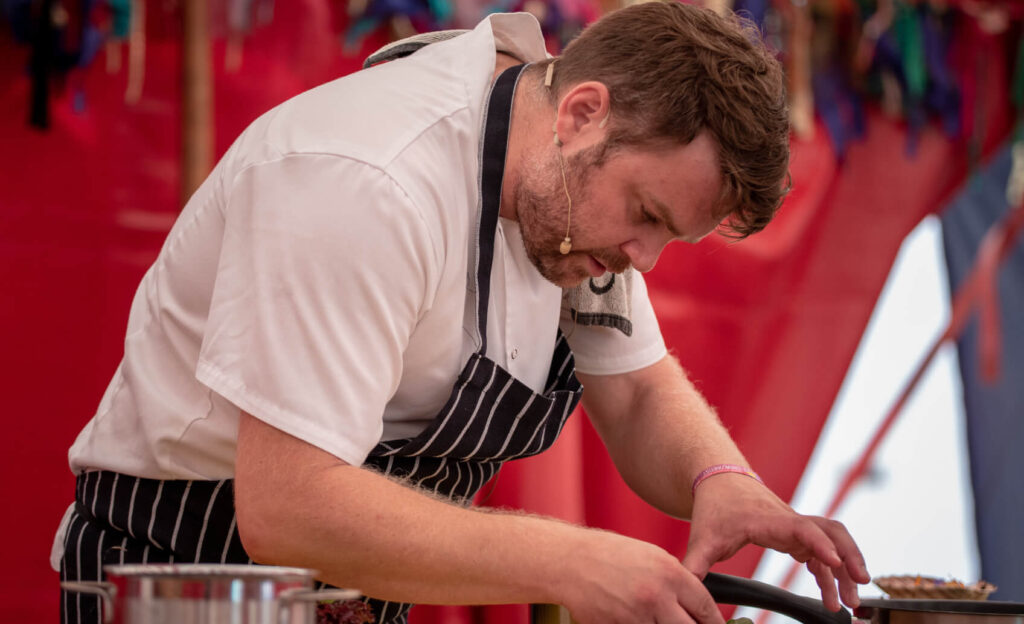 The region’s culinary heroes and heroines will be cooking up a storm over the food festival weekend. On Saturday night, owner of the Michelin-starred Pony & Trap, Josh Eggleton, together with Rob Howell, Head Chef of Root, which recently won a Bib Gourmand award, will be cooking the feasts.

Josh says: “Valley Fest is a true celebration of local, seasonal and honest food. So whether you’re an artisan producer, a food lover or simply someone with a healthy, hearty appetite, this is a festival for you. I have been involved since Valley Fest began as its ethos and dedication to showcase the region’s finest produce and talent is second to none. And it’s great fun there too!”

Josh Eggleton for those that don’t know is owner and chef patron of the Michelin Starred Pony & Trap in Chew Magna, south of Bristol.  The Pony & Trap is also named as the 6th best gastropub at the Estrella Top 50 Gastropubs awards and has received countless other accolades placing him in the upper echelons of British chefs.

Sustainability has always been high on Josh’s agenda and in the last year he has reflected this passion for local produce with the development of The Pony & Trap’s kitchen garden. Growing his own produce gives him the opportunity to collaborate with the gardeners to develop a higher standard and taste of produce by using non-commercial strains.  It also gives him an opportunity to innovate sustainable agricultural systems.

In 2014 Josh founded the award winning Salt & Malt brand, a fish cafe on the banks of Chew Valley Lake and a second site in Wapping Wharf, Bristol where both are famed for high quality gluten free fish and chips.Josh is also co-owner of the popular local Bristol gastropub, The Kensington Arms and co-owner of the brewery- The Bristol Beer Factory.

It doesn’t stop there!  He is co-founder of the sustainable conscious pop-up restaurant and food festival –  Eat Drink Bristol Fashion which also owns Yurt Lush cafe, bar and bistro along with the highly acclaimed Root- a dining concept putting vegetables at the heart of the menu.  This restaurant reflects Josh’s philosophy of eating more veg and less meat.

For three consecutive years Josh celebrated his passion for South West food with his appearances on the BBC’s Great British Menu where he won the regional stages. If any of this was not enough, Josh also co-founded The School of Food in 2017, a new style of progressive culinary academy.  He also consults for other food operators around the World.

Rob is head chef of Root. A Bristol based innovative restaurant that boasts a stellar seasonal small plate menu that gives vegetables a star billing. Root’s ethos puts sustainability front and centre with high profile backing from the Sustainable Restaurant Association. The Root concept is designed to help raise awareness of the environmental and health benefits of eating more vegetables and less meat.  The food also demonstrates what can be achieved with the Great British vegetable!