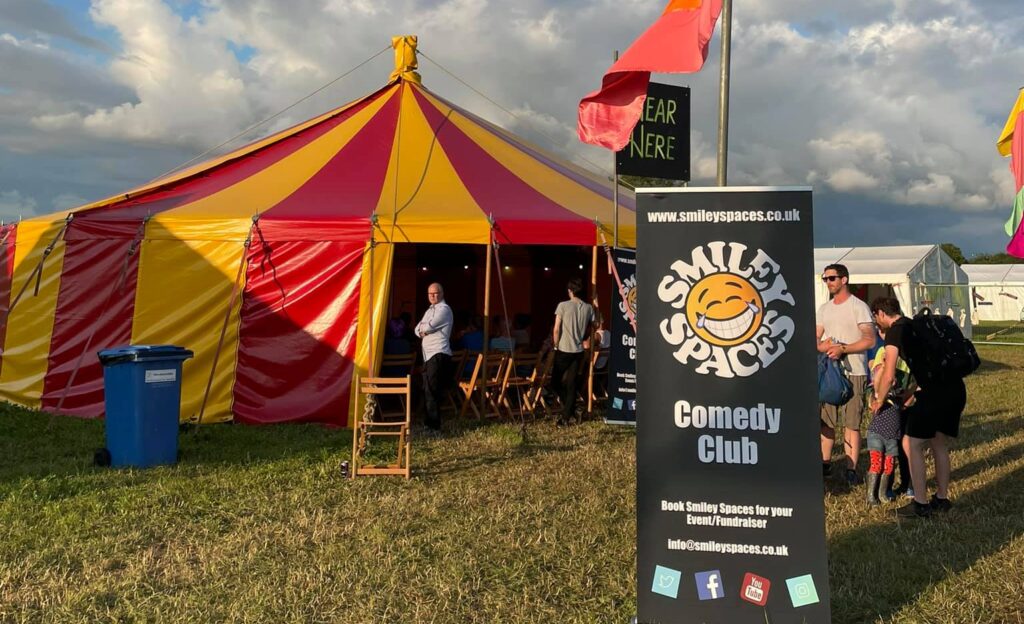 Smiley Spaces will be joining us once again on Sunday 7 August with a stellar roster of comedians!

Smiley Spaces are first and foremost comedy lovers, they’re a small family business trying to bring the very best Standup Comedians to our local area. Many of them you may have seen on television shows such as “Live at the Apollo”, “The Michael Macintyre Roadshow”, “Mock the Week” etc. Their aim is to provide the finest Comedy bills available anywhere outside of London.

Who you can expect to chuckle along with:

On TV screens, Andy appeared at The Hackney Empire for The John Bishop Show (BBC1) alongside a stellar line-up from the worlds of comedy and music, Andy was then invited back to perform on the John Bishop Christmas Show at The Lyceum Theatre with Kylie Minogue and Olly Murrs. He has recorded TV performances for Comedy Central on two series of ‘Live The Comedy Store’ and on two series of ‘The World Stands Up’. He has performed all over the world and in venues as varied as, a company of soldiers in Saddam Hussein’s Palace in Iraq, to a sold-out Royal Albert Hall in aid of the Teenage Cancer Trust.

Fin Taylor has made a name for himself as one of the most talked about comedians working in the UK. A favourite of Edinburgh Festival audiences, his regular 5-star sell out shows have propelled him on to appearances on BBC2’s Live At The Apollo, The Mash Report, and 8 out of 10 Cats (E4), as well as Comedy Central’s Roast Battle and Live From The Comedy Store. In Australia he has appeared on The Project as well as The Allstars Melbourne Gala (ABC) and at Just For Laughs in Montreal he recorded a spot on The Michael Che Gala (CBC). In the US, Fin has written for Comedy Central’s Alec Baldwin Roast.

Beginning his career in stand-up comedy in 2005, Marlon Davis made the final of two national competitions Laughing Horse and So You Think You’re Funny at the Edinburgh Fringe Festival the following year, very quickly and firmly cementing his status as a rising star on the comedy circuit. Marlon has supported Kevin Bridges, Michael McIntyre and Alan Carr on tour and is performing at clubs, arts centres and theatres all over the UK. Marlon’s act is inspired from his upbringing, exploring urban Britain tackling its social issues with skilful characterisations.

Nick Page is a seemingly indestructible, larger than life, award winning English comic whose life is a series of disasters somehow turning into unlikely triumphs. No gimmicks, no PowerPoint, no props and no flip-charts. Just stories and belly laughs with a master of his art.

Sally-Anne Hayward is an award-winning comedian (Best UK Compere 2019 and Holsten Pils ‘Fans of Comedy’ award) and a sought-after corporate performer (with clients including Virgin Media and Alcatel). She is also a regular compere at Glastonbury Festival.

She has proven her writing talents with numerous Edinburgh Fringe shows and can display a depth of material that marks out the best comic talent. She has performed all over the world and has provided tour support for Sarah Millican, Russell Howard,  Russell Kane, Hal Cruttenden and Suzi Ruffell. An accomplished breakfast radio presenter (Star 107.2), with TV credits (‘The Blame Game’ BBC) and radio panel show credits (‘Elephant in The Room’ BBC Radio 4), as  well as TV warm-up (‘Deal or No Deal’ Channel 4). She co-hosts a podcast called Spit or Swallow, along with Lou Conran. Together they incorporate their love of wine, celebrity guests and drunk stories.A journalist also, Sally-Anne has written for Standard Issue Magazine on a variety of subjects.

Thomas Green is a powerhouse of energy, with endless expressions and a commanding stage presence. A former school teacher, Green swapped the whiteboard marker for a mic, and hasn’t looked back since.

Green has established himself as one of the most sought after comics on the UK circuit, headlining the biggest clubs in the UK. Regularly playing nationwide at high profile clubs such as The Comedy Store, Glee, Hot Water Comedy, Up The Creek, Top Secret Comedy, The Frog and Bucket – Green is never far from a stage near you.

After sell-out festival seasons in Adelaide, Perth, Melbourne and Edinburgh, Green has most recently been tour support for Jason Manford and Russell Kane.

Vince Atta, it’s fair to say that everything Vince Atta touches turns to gold. His high-octane performances, stunning delivery & flawless array of impressions leave you short of breath. With a broad, wonderful spectrum of material ranging from students, Spanish horses in a kitchen, psychotic London ex-girlfriends, pointless racial pride & the advantages of an alcoholic mother, Atta brings an inspiring touch of pathos which demonstrates an unerring ability to turn experience into bullet proof comedy.

Vince is also an excellent compere employed not just on the comedy scene but for a wide range of events including Emergenza’s prestigious Battle Of The Bands competition 2006 performing in front of 1500 people & hosting the Middlesbrough Mixed Martial Arts Tournament 2006.