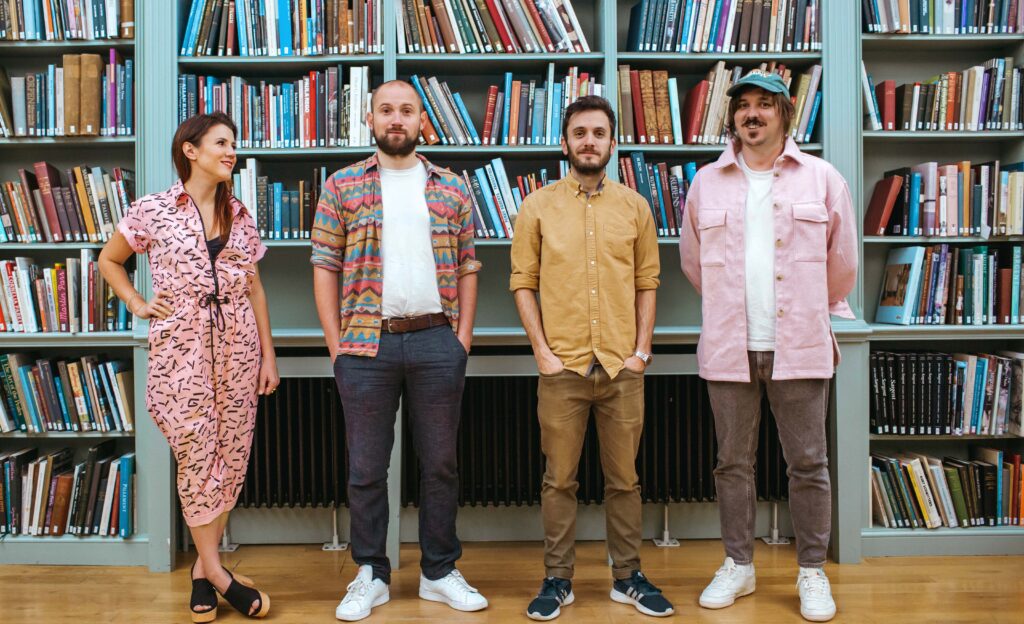 This spring Keston Cobblers Club return with their brand new album, ‘Alchemy’ – the follow up to their critically acclaimed 2019 album, ‘Siren’ – after a two year break.

Alchemy is the new album from Indie-folk band Keston Cobblers Club. Returning to their roots, the theme of the album is based on an old folklore from their home town. The Anthem of the Alchemist tells the story of an Alchemist who dedicates his life to turning basic metals into gold, only to discover when older that the treasures he sought were always within him. He finds an old message in a bottle buried beneath Keston Ponds and Caesar’s Well that he forgot he had written as a child. It reads “You will find it right beside you. Forget the gold it’ll only blind you”.

Using this fable, the Cobblers set out to create an anthology of songs that would help guide the Alchemist and any other lost listener to discover their inner wealth. Just like the practice of alchemy, siblings Matthew and Julia fuse different styles and genres to create their own distinctive sound. Each track is a different remedy to an obstacle, continuing to emanate the hook-laden melodies and rousing arrangements that have already won them an army of loyal fans. With intricate instrumentation and honest, accessible lyrics, the Cobblers ensure an immediate familiarity with audiences far and wide.

Matthew says: “We wanted to return to the origin of Cobblers, delve into the folklore behind our ethos and create an eclectic album that is quintessentially ‘Cobblers’.” The album journeys from anthemic, raucous singles such as their first single Find My Way (released when the Cobblers were touring the UK with Paul Heaton and Jacqui Abbot in October), Rigmarole and Jupiter, to the stripped, beautiful songwriting of Lullaby for the Wide Awake, Eglantine and Junctions. The Cobblers also go back to what made them unique from the start, with idiosyncratic tracks such as No, You Are Not Alone, Josephine’s Routine and Strangers Now. Julia says; “This album was a chance for us to have fun, that’s how Cobblers started, without the pressure of ticking certain boxes. After our 10 year anniversary we realised how lucky we are to still be making music full time.”

Over the last 10 years, Keston Cobblers Club have been steadily building a name for themselves. Their debut album One, For Words launched in 2012, released independently, followed by two EPs, A Scene of Plenty and 2014’s A Pocket Guide to Escaping. Then in 2015 came Wildfire the album which won them huge praise everywhere from BBC Legends such as Steve Lamacq, Dermot O’Leary, Edith Bowman and Bob Harris, MOJO Magazine, The Guardian, The Independent and The Financial Times to Songlines, fRoots and Clash as well as a Maida Vale session for BBC Radio 6. Their last two albums, Almost Home and Siren, further increased their following, with great industry praise from such as Zoe Ball and Lauren Laverne, supported by multiple European headline tours and crescendoing with a 10 year anniversary SOLD OUT tour. “We can’t believe it’s been ten years” says Tom, “we’re incredibly proud of what we’ve achieved. Cobblers was originally formed for fun amongst good friends, so when it took off and we began performing full time in 2013, it rather took us by surprise. We’ve now had some time to really reflect on this period and are so grateful for the experiences and opportunities we’ve had so far. This album is the next chapter.”

Their live shows are displays of genuine warmth and dazzling musicianship, honed over years of playing some of the UK’s biggest festivals, including Glastonbury, Bestival, Cambridge Folk Festival, Wilderness and Green Man; they even ran their own festival to launch an album – Camp Wildfire.

Burberry asked the band to perform at their Menswear SS2016 event to a VIP audience and, after a triumphant UK and European tour in 2015/16, including sell-out dates at London’s Scala and Union Chapel, the band were invited to open for folk royalty Bellowhead on their farewell tour in 2015, as well as for pop legends Paul Heaton and Jacqui Abbot on their entire UK arena tour in 2021. All focus is now on Alchemy, which will be supported by a UK tour, kicking off in Nottingham on the 21st April. There’s also another European tour in the works, and a busy summer of festivals.